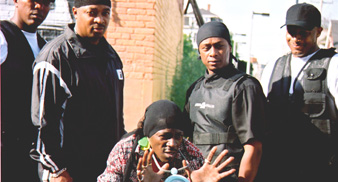 Public Enemy have been revealed as one of the first artists to take part in this year’s Don’t Look Back season of concerts. The now annual shows see artists pick an album from their back catalogue to play in it’s entirety.

Public Enemy will be performing their hugely influential second album for Def Jam records ‘It Takes A Nation Of Millions To Hold Us Back’, for three UK shows only, starting at London’s Brixton Academy on May 23.

PE will also play at Manchester Academy on May 26 and Glasgow ABC1 on May 27.

Tickets go on general sale this Friday (February 8) at 9am. However a fans pre-sale will start through www.publicenemy.com on Wednesday (February 6).

Also newly announced for Don’t Look Back is Wu-Tang-Clan member Raekwon – who will perform his 1995 solo record ‘Only Built 4 Cuban Linx’ for one-night only.

For more information about all Don’t Look Back Shows, see www.dontlookbackconcerts.com