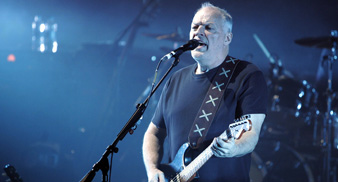 Pink Floyd legend David Gilmour‘s famous black stratocaster has been made into a Fender ‘Signature Model’ and will be available to buy from September 22.

The guitar, which has been replicated from the one Gilmour used on classic Floyd albums such as ‘The Dark Side of the Moon’, ‘Wish You Were Here’ and ‘The Wall,’ will feature his playing’s distinctive sound.

Gilmour says: “I told Fender that it was just an ordinary Strat that I bought, but I must say they’ve done a great job of recreating it.”

The new ‘Black Strat’, will feature the same maple neck, black pick guard, shortened tremolo arm and custom electronics as the original and will come housed in a custom black case with a copy of a book ‘The Black Strat’ giving the guitar’s history, by David Gilmour’s guitar technician Phil Taylor.

The signature model guitar will be released at the same time as Gilmour’s triple live album ‘Live In Gdansk’, recorded last year on his solo world tour.