Charlie Gilmour was seen swinging from the Cenotaph 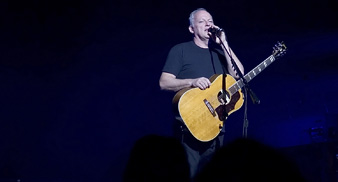 The son of Pink Floyd guitarist Dave Gilmour has been charged with violent disorder in relation to last year’s student protests in London.

Charlie Gilmour, 21, was pictured swinging from a Union flag on the Cenotaph in Whitehall on December 9 while protesting about student fees.

The Cambridge University student has also been charged with the theft of a mannequin leg during the protests, reports the Press Association.

He will appear London‘s City of Westminster Magistrates’ Court on February 10 to face the charges.

Speaking in reaction to his December arrest, Gilmour described his actions as a “moment of idiocy” and claimed not to know the significance of the Cenotaph, which commemorates Britain’s war dead.