Libertines/Babyshambles man thanks fans for support after completing sentence 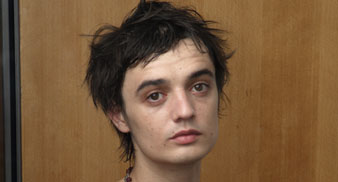 Pete Doherty has been released from jail, a month earlier than expected.

Earlier this year (May 20) The Libertines and Babyshambles singer was sentenced to six months in prison for possession of cocaine.

On the website Albion Rooms a message appeared stating, “On this bright sunny morning Peter was released from prison and thanks everyone for their valued support while inside.”

Posting under the pseudonym ‘Babybear’, Doherty‘s manager, Adrian Hunter, hit the message boards of website French Dog Blues to show his thanks for the support fans had given the troubled singer.

He wrote, “Peter has been released as was reported there hours ago. Long day folks but a happy one. Many good things done. All’s good and peace and quiet shall now ensue. A bit of ‘bedding in’ and reflection is on the cards and so much the better.”

When originally sentenced Judge David Radford said Pete Doherty had an “appalling record” in court. He had already appeared on no less than 13 occasions.

Doherty could still face up to five years in prison for charges of burglary, after he allegedly broke into a record shop in Germany and stole a guitar.