'The Hustler' has lost his battle with cancer, aged 83 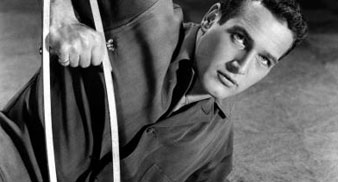 There’s a story about Steve McQueen being offered the role of architect Doug Roberts in The Towering Inferno. McQueen turned it down, asking instead to play fire chief Michael O’Hallorhan, claiming that there’s no way an audience would find him believable in any role other than a straight-ahead man of action. The part of Roberts, instead, went to Paul Newman. At that point, in 1974, Newman’s most successful roles had been as outlaws, con-men and rebels – characters arguably not that far removed from the kind of people who peppered McQueen’s own CV. But it says a lot, perhaps, about how cinema audiences were prepared to accept him, that despite the succession of outsiders and wild ones he’d played, there was something inherently likeable and appealing about Newman.

It’s certainly true in Butch Cassidy And The Sundance Kid (1969). For a film made in the late Sixties – a time where it was all about sticking it to The Man – it’s maybe not surprising that audiences would be rooting for characters who, in an earlier, less complicated era would have been the bad guys. The easy charm of Newman and Robert Redford put Butch & Sundance in the Top 10 grossing movies for the decade. Newman had been a more dangerous kind of outlaw for Arthur Penn in The Left-Handed Gun (1958), based on a TV play written by Gore Vidal where he played a feral Billy the Kid with an unnerving hair-trigger temper. You wonder what he’d have been like for Peckinpah.

Newman was a huge star in the Sixties – an era not exactly light on major Hollywood muscle. He shared the decade with Brando (with whom he’d studied at the Actors’ Studio under Lee Strasberg), McQueen, Redford and later, Beatty and Hoffman. If you see the Sixties as the transitional period between the Golden Age of Hollywood and the modern era, then you can argue that Newman is the link between Clark Cable and George Clooney. His classic movie star looks would certainly have not been out of place in a previous time, while his willingness to build a CV around rebels and outsiders chimed with the decade’s counter-culture leanings and was picked up by a later wave of actors. You can see the arc of his career, and how he successfully manoeuvred between the demands of different eras of filmmaking by the directors he worked with. There’s Preminger, Robert Wise, Michael Curtiz, Hitchcock and Huston; Altman and George Roy Hill; Scorsese, the Coens and Sam Mendes.

Newman did his last on screen work for Mendes, playing a gangster in The Road To Perdition (2002). The film itself is often too sentimental, but Newman is towering as Irish Catholic Mob patriarch, John Mooney. It reminds me, to some degree, of the way Leone used Henry Fonda, similarly in the autumn of his career, as the sadistic killer in Once Upon A Time In The West. That was a brilliant piece of counter casting that subverted Fonda’s legacy of noble, finely chiselled heroes. So, too, here was Newman, wintry and sinister, telling Tom Hanks’ enforcer Michael Sullivan, “None of us will see Heaven.” Whatever we might have thought of Newman’s catalogue of jailbirds, cardsharps or pool hustlers, none of them were ever as vicious as this.

Click here for some classic clips from Newman and for the Uncut film blog to let us what your know your thoughts and feelings about Paul Newman. What were his defining roles for you? How do you think he’ll be best remembered..?