Paul McCartney’s banana and the new issue of Uncut… 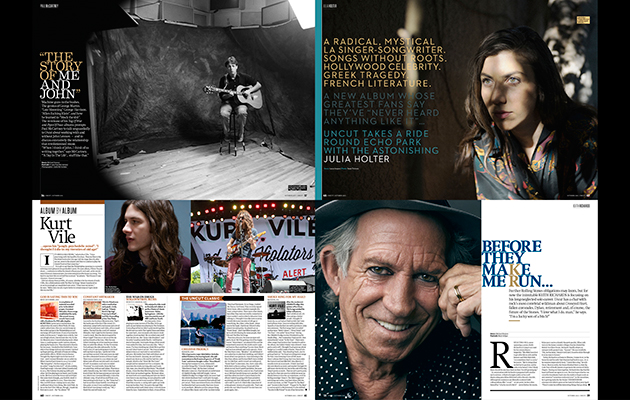 What would you do with Paul McCartney’s banana? One evening a few weeks ago, I diligently interrupted my holiday to go through some emails back at the hotel room. One, from my colleague Michael Bonner stood out. Michael had written it at Ashford Station, on the way back to London after spending some time at McCartney’s studio near Rye.

Ostensibly, McCartney was talking to Uncut about the imminent reissues of Pipes Of Peace and Tug Of War. As Michael put it in the email, though, “he can’t really stop himself talking about The Beatles,” and the interview opened up into an intimate and wide-ranging chat that used “Here Today” as a jump-off point to discuss much about McCartney’s relationship with John Lennon. From their earliest songwriting attempts, through the Beatles split, right up to the distressing aftermath of Lennon’s death, McCartney is candid and poignant, to an almost unnerving degree.

He remembers in detail the day he heard Lennon had been shot, for instance, remembers Linda telling him the news, then deciding to go ahead with a planned recording session (with The Chieftains) because “you’re always advised to work through your grief.”

“I came out and was still in shock,” he tells Michael. “I didn’t want to see any paparazzi but they were there. There was guy with a mic. He said, ‘What do you think of John…’ We were driving past, so it wasn’t like I was standing doing a big interview. I just couldn’t think of anything. I said, ‘It’s a drag.’ And I meant, ‘An unholy fucking bastard worst drag ever.’ But the words that came out, ‘It’s a drag’, sounded so casual. It certainly didn’t sum up what I was feeling. Anyway, there you go. Too bad. That’s what happened.

“Then I came home and just cried and saw the news and tried to find out some more details on the news and saw pundits coming on and doing what people had wanted me to do. Which was to be sensible about his death and what a tragedy it was, du-du-du-du-du-du, and he was a great man and du-du-du-du-du-du. But I couldn’t. I couldn’t get any of that together. In fact, I rather despised the pundits who did. I can’t blame them now, but they were old friends or casual acquaintances and they’d been hauled in to say something. Yeah, but it was a hell of a shock for months at least, on an immediate level, and then there were all sorts of repercussions and stuff.”

You can read the whole interview in this month’s new issue of Uncut, on sale today in the UK, and a pretty good example of how we’re trying to draw powerful connections between rock’s canonical superstars (I would use the word ‘iconic’ at this point, but it’s become so naff and meaningless nowadays that I’ll do anything to avoid it) and the very best music being made in 2015. As a consequence, we have terrific interviews with McCartney, Keith Richards and John Lydon, alongside equally compelling pieces about Julia Holter and Kurt Vile.

There are also pieces on Dan Auerbach, Squeeze, Mercury Rev, Richard Farina, Uncle Acid & The Deadbeats and Beirut, and deep reviews of Bjork, Link Wray, Robert Forster, Low, New Order, David Gilmour, Wilco and the Dave Rawlings Machine. Low, Lydon, Auerbach’s Arcs, Uncle Acid and Forster are also on this month’s free CD, along with the likes of Phil Cook, Bilal amd Titus Andronicus, a wonderful lost gem from Elyse Weinberg (featuring Neil Young on guitar), and a revelatory version of “Reel Around The Fountain” by James Elkington & Nathan Salsburg that shows how Johnny Marr was a folkie all along.

Anyway, about that banana. “Macca,” wrote Michael in his original email, “gave me a banana for the train” I’d like to say we’ve preserved it in some way as a holy relic, as part of an Uncut museum of gifts from rock’s beneficent grandees. Unfortunately, though, the iniquities of the national rail network put paid to that dream. “It’s proved useful,” he continued, “as I’ve been at Ashford for an hour due to a derailment further down the line…”