OMD Reform and Return With Aplomb 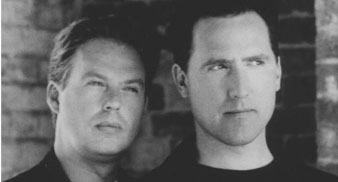 OMD – Orchestral Manoeuvres In The Dark, namely Andy McCluskey and Paul Humphreys – are back, and working on lots of grand musical projects simultaneously.

OMD are re-visiting their 1981 breakthrough album Architecture & Morality with a special European tour; during which they will play the album in its entirety for the first time ever – as well as utilising a massive 120-piece orchestra and choir as backing musicians.

Architecture & Morality was one of the highest selling electronic albums of the early ‘80s, shifting over three million copies and spawning three Top 10 hits, “Souvenir,” “Joan Of Arc” and “Maid Of Orleans.”

As well the comeback tour, McCluskey and Humphreys are also working on a unique audio-visual installation with award winning artist Peter Savile. The installation will be premiered at FACT in Liverpool in March as part of the city’s Capital of Culture celebrations.

The installation has a working title of ‘The Energy Suite’ and is based on five electricity generating power facilities.

Getting more orchestral action, OMD are also working with The London Philharmonic Orchestra for a unique concert tour incorporating their “Energy Suite” installation. The LPO will play “The Energy Suite” with giant screens carrying projections of the power station images, as well as interpretations of some of OMD’s hit records.

The original 80’s band line-up of Andy McCluskey, Paul Humphreys, Martin Cooper and Malcolm Holmes plus the immense orchestral cast will play at the following UK venues next year: