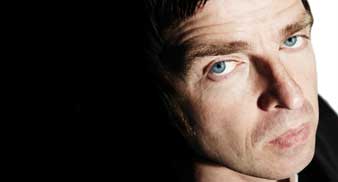 Noel Gallagher has posted a trailer for the video for his debut solo single ‘The Death Of You And Me’ online, scroll down to the bottom of the page and click to watch it.

The trailer contains a snippet of music, but is mostly Gallagher joking around with the promo’s director Mike Bruce on a set that appears to resemble the Wild West.

Gallagher, in typical fashion, says of the track: “It’s really hard to talk about your own music, what can I say, I really like it, it’s amazing.”

‘The Death Of You And Me’ was confirmed as Gallagher‘s debut solo single yesterday (July 19) and will be released on August 21. New song ‘The Good Rebel’ will appear as a B-side on all formats of the single.

The guitarist’s solo album, ‘Noel Gallagher’s High Flying Birds’ is released on October 17 through his own label, Sour Mash. The album was recorded over the past year in London and Los Angeles with producer Dave Sardy.

The album will be followed up next year with another, more experimental album, made in collaboration with Amorphous Androgynous.