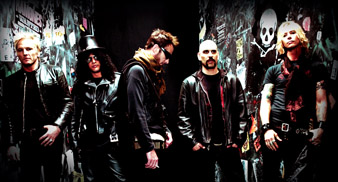 Velvet Revolver guitarist Slash has revealed to Rollingstone that a replacement front man for the recently departed Scott Weiland is very close.

Slash has said: “We actually worked with a guy, before we left to go to the UK and there just wasn’t enough time to break him in, so we’re gonna work with him again some more, and maybe some other guys as well.”

Slash has also publically dismissed Scott Weiland’s suggestions that former Skid Row vocalist Sebastian Bach should be hired “I thought [Weiland] could be a little bit more imaginative. I’m not sure if that was meant to be a pot shot or what. Whatever, it’s not worth any real drama.”

Weiland in the meantime has annouced that his former group Stone Temple Pilots will tour the US this year.