New Order: “It’s always been about the future” 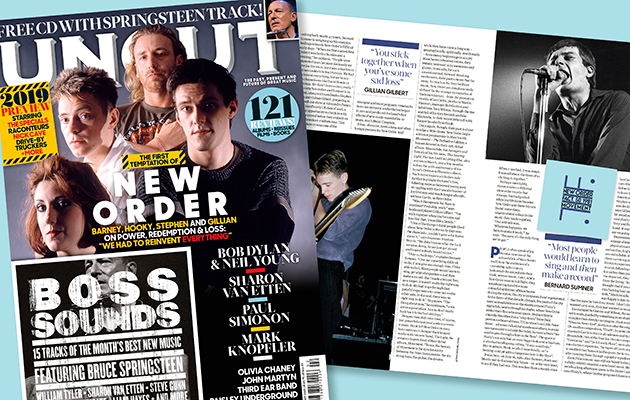 New Order have announced the reissue of their debut album in deluxe boxset form.

Movement – The Definitive Edition includes a bonus CD of previously unreleased tracks plus a DVD of live shows, and will be released on April 5, 2019.

The new issue of Uncut – in shops tomorrow (December 20) but available to order online now by clicking this link – features an in-depth interview with all four members of the band about the difficult transition from Joy Division to New Order and the creation of Movement.

“One of the things I think people liked about New Order in the early days was the shambolic, couldn’t-give-a-fuckness about it,” adds drummer Stephen Morris. “We didn’t know what the fuck we were doing. So we just got pissed and hoped nobody would notice.”

“I like a challenge,” continues Sumner. “Give me something difficult to do, if you give me enough time, I’ll be able to do it. Most people would learn to sing, get a bit of experience and then make a record. But I made a record first, as a singer. It wasn’t really the right way to do it. We had to go through that painful experience to come out on the other side. In the end, there was no right way to do it.”

Peter Hook left New Order in 2007, but continues to honour their historic works with his new band, The Light. He remains hugely fond of Movement: “To me, the beauty of Movement is the synchronicity between the three instruments: the six-string bass, the guitar, the drums. When it worked, it was magic. It was all about the three of us clicking in together.”

Perhaps inevitably, Sumner takes a different view as he recalls that strange, liminal period when Joy Division became New Order and three friends found some deep, unarticulated solace in the music they made together. “Our attitude was, ‘Whatever happens, we have to make it work,’” he says. “Because it’s the only thing we’ve got.’”

“It’s always been about the future,” he reflects “Without that attitude I wouldn’t be here today, and we wouldn’t have come up with  tunes like ‘Blue Monday’ or ‘Bizarre Love Triangle’ or ‘Temptation’ or ‘Everything’s Gone Green’. Right from the early days of Joy Division,  I always had a nagging thought in the back of my head: wouldn’t it be fabulous if you could move music forward?”

You can read much more about the making of Movement in the new issue of Uncut, in shops tomorrow.

Peruse the tracklisting for Movement – The Definitive Edition below: