He blames the incident on his car 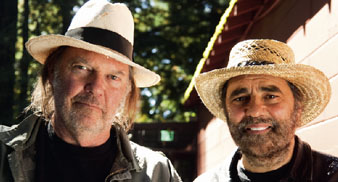 Neil Young has blamed a fire at his San Francisco warehouse on a fault in a fuel-efficient car he had been working on.

The music legend lost musical instruments and memorabilia as a result of the fire, which took place on November 9 and resulted in an estimated $850,000-worth (£534,000) of damage, reports BBC News.

He has now said he believes the fire was caused by the charging system he had been using on his so-called LincVolt car – a project for which Young converted a 1959 Lincoln Continental car to run off battery power.

“The wall charging system was not completely tested and had never been left unattended. A mistake was made. It was not the fault of the car,” Young wrote on LincVolt.com.

He vowed to continue with the project, which aims to increase fuel-efficient travel, writing: “Our project is to demonstrate alternative energies for transportation that are clean. We’re still in a race against time. On a project like this, setbacks happen for a reason and we can see that very well from here.”

The LincVolt was severely damaged as a result of the fire, although Young says he hopes to rebuild it using parts from similar models.