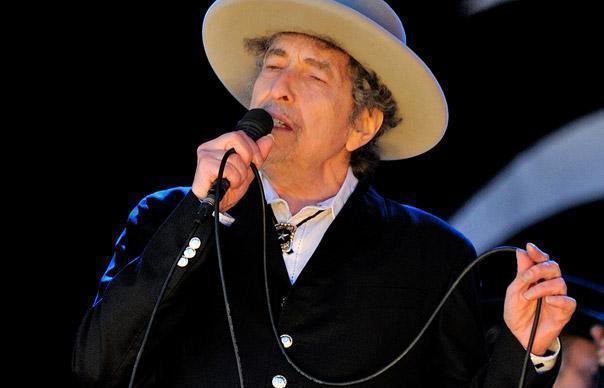 Bob Dylan delivered a 30 minute acceptance speech at MusiCares Person Of The Year 2015 Gala on Friday night (February 6) that saw him thank Jimi Hendrix, Johnny Cash, Joan Baez and many others for supporting his music, Rolling Stone reports.

Although Dylan did not perform any music at the event, Bruce Springsteen, Neil Young, Jack White and Beck were among the musicians to take to the stage. Scroll down for the full set list.

“We can’t forget Jimi Hendrix,” said Dylan. “I actually saw Jimi perform when he was with a band called Jimmy James and the Blue Flames. Something like that. And Jimi didn’t even sing. He was just the guitar player. He took some small songs of mine that nobody paid any attention to and brought them up into the outer limits of the stratosphere, turned them all into classics. I have to thank Jimi, too. I wish he was here.

“Johnny Cash recorded some of my songs early on, too,” Dylan continued. “I met him about ’63, when he was all skin and bones. He travelled long, he traveled hard, but he was a hero of mine. I heard many of his songs growing up. I knew them better than I knew my own. ‘Big River’, ‘I Walk the Line’. ‘How High’s the Water, Mama?’ I wrote ‘It’s Alright Ma (I’m Only Bleeding)’ with that song reverberating inside my head.”

The MusiCares Person of the Year is presented annually as a part of Grammy Week to honour musicians for their achievement in the music industry and dedication to philanthropy.

You can read the full transcript of Dylan’s speech here.

MusiCares Person Of The Year 2015 setlist: