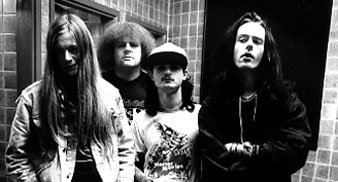 Mark Titchner, a nominee for 2006’s prestigious ‘Turner Prize’, has declared the music of Napalm Death to have been influential on his work.

Titchner extols the virtues of the Death’s ‘abrasive music’, praising their use of the voice as an instrument and the way they “push the boundaries of language”.

He also draws comparisons between the Brum rockers’ unholy racket and his art.

Have a look at Mark’s work, listen to expert Nicholas Bullen’s opinions
on it at www.tate.org.uk/britain/turnerprize/2006/marktitchner.htm, then check out some classic Death and decide for yourselves how similar they are!

In fact, look no further than Earache Records’ 20-year anniversary edition of the highly influential debut Napalm Death album “Scum”, due out in early 2007, complete with a recently filmed in-depth DVD documentary about the making of the album.