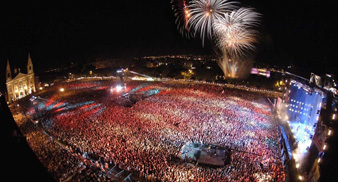 MTV are to bring their annual Isle of MTV Summer music event to the southern Mediterranean island of Malta for three years, starting this June.

Gorilllaz, The Chemical Brothers, Snoop Dogg and Garbage have all previously headlined at the annual free MTV open-air concerts which have been held in Italy, Spain, Portugal and France.

Last year’s mammoth success has now led to a unique deal which sees the island’s goverment and MTV teaming up for an unprecedented three year deal. Isle of MTV has never previously returned to the same location.

Richard Godfrey of MTV Networks International, said: “Isle of MTV is a great part of Europe’s summer music calendar, and once again we’ll be offering our audience access to the world’s biggest artists in a truly spectacular setting.”

Artists and DJs for this year’s three-day event will be announced in the coming weeks.

The open-air finale will be broadcast to 147 million viewers across 20 MTV countries, but stay tuned to uncut.co.uk – We’ll be giving you the chance to win a trip to the Isle of Malta Special!