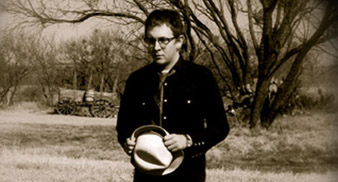 Micah P Hinson, the Texan singer and songwriter, has announced he will tour the UK, just two years after a dislocated vertebra put him into early retirement.

He will play his first show for Club Uncut at the Borderline before he embarks on a 16 date tour of the UK and Europe.

The tour will preview tracks from his third album, Red Empire Orchestra, due for release on July 14.

During the making of his second album, Micah P Hinson And The Opera Circuit, Hinson dislocated a vertebra. His health rapidly deteriorated and retired from touring to his home in Texas.

The new album came about after an intervention from Anthony and the Johnsons’ producer and engineer John Congleton who wrote to Hinson about recording together.

“This letter pulled me out of the rut I had found myself in,” says Hinson. “Once I got this letter, something felt right and I knew the calling was there.”

“I find myself ready to take on the world again, and show them what I have up my sleeve,” he said.

Micah P Hinson will release the first single, called When We Embraced, on June 30.