The ten track album is due for release in September 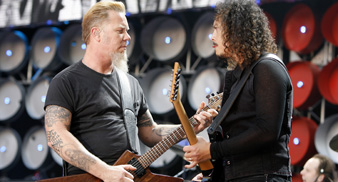 Metallica have revealed the tracklisting for their ninth studio album Death Magnetic, which is due for release in September.

Frontman James Hetfield has commented on the meaning of the album’s title, saying, “It started out as kind of a tribute to people that have fallen in our business, like (Alice In Chains frontman) Layne Staley and a lot of the people that have died, basically — rock and roll martyrs of sorts. And then it kind of grew from there. Thinking about death…just like a magnet, some people are drawn towards it, (and) other people are afraid of it and push away.”

Hetfield added, “The concept that we’re all gonna die sometimes is over-talked about and then a lot of times never talked about — no one wants to bring it up; it’s the big white elephant in the living room. But we all have to deal with it at some point.”

The band’s ninth studio album has been produced with legendary rock producer Rick Rubin in Los Angeles and is reportedly a return to the band’s early fast and loud sound, with the return of their infamous guitar solos, which were left off their previous 2003 album St Anger.

Metallica’s Death Magnetic is due out on September 22
and will also be available as a Guitar Hero download.

The band are due to headline this year’s Reading and Leeds festivals over August Bank Holiday weekend.

The tracklisting for the album is as follows:

‘That Was Just Your Life’
‘The End Of The Line’
‘Broken, Beat & Scarred’
‘The Day That Never Comes’
‘All Nightmare Long’
‘Cyanide’
‘The Unforgiven III’
‘The Judas Kiss’
‘Suicide & Redemption’
‘My Apocalypse’