Official DVD release of the show to come? 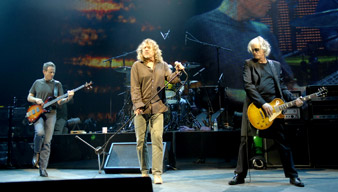 By yesterday afternoon, Uncut had found clips recorded on fans’ mobile phones for ten out of the 16 tracks played at the charity show, however video sharing site YouTube have now removed all Led Zeppelin concert-related footage.

It is understood that the band own the rights to the gig and their management requested its removal, reports Billboard.

Prior to the show on Monday, rock magazine Kerrang reported that Led Zep’s show was to be filmed for a DVD release, and speculation is now that any official release will come in the new year.

Meanwhile, rumours of a two-year world tour to follow the O2 Arena success are flying – click here for details!

Don’t forget, if you were at the O2 Arena, email us if you have footage of the missing songs, or if you have photos and reviews you wish to share. Email us at: Uncutaudiencewith@ipcmedia.com