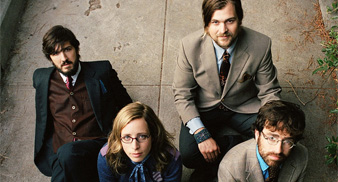 Uncut-acclaimed US singer-songwriter Laura Veirs has announced that the follow-up to 2005’s “Year Of Meteors” will be released on March 26.

Named “Saltbreakers” after her recording and touring band, Veirs’ second album for Nonesuch “Saltbreakers,” sees her continue a collaboration with The Decemberists’ Tucker Martine, experimenting with indulgent vocals.

An example of this shows through with album track “In The Country” – where Veirs filled Johnny Cash and June Carter’s Nashville cabin with a eight-person Baptist choir.
Veirs described the recording of that track simply as “transcendent.”

The album will be preceded by a single “Don’t Lose Yourself’”, on March 19, but you can preview new album track “Pink Light” exclusively here:

You can also catch Veirs and The Saltbreakers at the following venues this Spring: