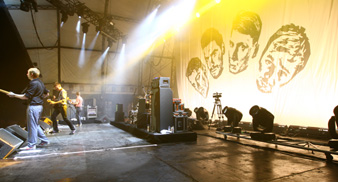 Franz Ferdinand have brought Latitude Festival‘s opening night (July 18) to a close with a barrage of tracks from their first two albums – plus a smattering of new songs, destined for their forthcoming third album.

The splatter of rain, which finally came down briefly after a mostly dry day, also helped draw the crowds to the Uncut Arena for the stage’s headline act Amadou & Mariam. Reminiscent of last year’s Uncut Arena triumphs Tinariwen, the Malian duo really delivered.

The Uncut Arena also saw Martha Wainwright deliver a strong performance and saw drama for Julian Cope, when his set was cut off prematurely after a delayed start.

The Obelisk Arena saw action as The Go! Team, Beth Orton, Death Cab For Cutie and British Sea Power all took to the stage.

Check back tomorrow (July 19) as Sigur Ros headline the mainstage, while Elbow and Grinderman are also due to perform!

We’ll be bringing you blow-by-blow blog accounts of all the arenas, live from Henham Park, the best of the comedy, drama and film as well as all the music – so make sure you check back in as the action unfolds this weekend…