If you're just back from Henham Park - catch up with our live reviews, blogs and pics here 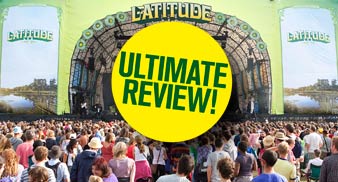 So the fourth edition of Latitude is over and you’ve been home for the hot soapy shower-of-your-life after four nights camping in a field in Suffolk – here, then, is Uncut ‘s Ultimate Latitude Review! We’ve been blogging our way throughout the weekend, so catch up with all the news, gossip and photos here!

Over in Uncut’s Arena, we were privileged to have Gossip, Spiritualized and Bat For Lashes topping the bill across the weekend.

Other music highlights for us were, in no particular order:Thom Yorke’s solo perfomance on the main stage, a rare appearance by The Vaselines, Wild Beasts and Dove’s sunset performance, hugely reminiscent of Elbow‘s similar slot at Latitude last year.

Uncut also caught up with shows by !!! and Editors as well as host of newer artists on the Uncut, Sunrise Arena and Woods’ stages, including;

As well as the music of course, the Literary, Comedy and Poetry tents were packed throughout – particular favourites included Edwyn Collins and Grace Maxwell‘s moving conversation about recovery from serious illness, Radio 4 regular Jeremy Hardy, Simon Armitage and Vivienne Westwood.

On the blogs, we’ve once again, also compiled our favourite snippets of overheard coversations, click here for part 1, part 2 and part 3. Hope you laugh as hard as we did, can you do better though? Send us your best Latitude eavesdrops!

If you, too, were at this weekend’s Latitude (July 16-19), or even if you weren’t; You can catch up with all of Uncut’s online coverage at the dedicated Latitude blog where you’ll find all sorts of photos, witty observations and reports from the weekend.

There will be a also be a full review following in the September issue of Uncut , out on July 31.