The Londoner's triumph over Amy Winehouse with their debut LP 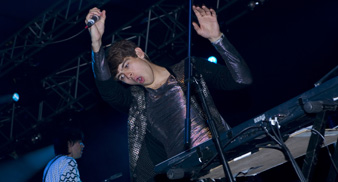 Klaxons have won this year’s Nationwide Mercury Prize for their debut album ‘Myths Of The Near Future.’

The band beat last year’s winners Arctic Monkeys, Amy Winehouse and bookies favourites Bat For Lashes and Jamie T to scoop the award for best album, as well as the £20,000 prize money.

The Mercury Prize judges said the group took them on an “ecstatic musical adventure”.

A shocked, and tearful band took the stage at the ceremony at London’s Grosvenor House Hotel, to be presented with their trophy by presenter Jools Holland. Klaxons singer James Righton declared “This really is too much.” While bassist Jamie Reynolds added “It was the worst two hours of our sitting there not knowing if we’d won. It means so much.”

Singer James also said that whilst making ‘Myths Of The Near Future’ they had been inspired by seeing Arctic Monkeys triumph at the Mercury’s the previous year.

He explained: “It was a year ago to the day, we were in the studio making this album, and we were sitting in the studio watching Arctic Monkeys win this,” he said holding up the award. “We saw that and thought we have to make this album great.”

Concluding, still looking gob smacked, Righton said: “None of us can really comprehend what has happened this year. We started as a joke and now here we are!”

Other contenders on the 12-strong shortlist included Amy Winehouse who made a surprise appearance on stage to perform ‘Love Is A Losing Game.’

Currently on a three month break after a reported drug overdose last month, the singer, looking heealthier than in previous weeks, performed an amazing version of the song at the last minute, backed with only a guitarist.

Other nominees who performed last night include New Young Pony Club, Fionn Regan, Dizzee Rascal and Bat For Lashes – the latter, the bookies are breathing a sigh of relief. Bat aka Natasha Khan rose from rank outsider to odds on favourite by the time the ceremony started.

What do you think of this year’s Nationwide Mercury Music Prize Winners? Do you think they are making music of the ‘future’ as the judges commented?