Kings Of Leon Live In Hammersmith

And you don't need to attend the show to see it! 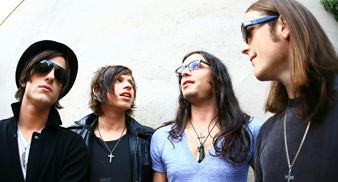 Southern rockers Kings Of Leon’s Hammersmith Apollo show next week is to air live over the internet.

The show next Wednesday May 23 is being broadcast straight from the venue at 9pm, through a partnership between Control Room and MSN’s ‘Music In Concert’ series.

As well as being shown live on the night, Kings of Leons fans will be able to access the concert footage for the next six months too.

The Followill boys have recently completed a gruelling North American tour as support to the mighty Bob Dylan, U2 and Green Day as well as performing their own shows.

Their recently released third album “Because Of The Times” has been very well recieved, with its bluesy indie rock.

Log on here to check out the live concert experience