Use Somebody coincides with band's UK arena tour 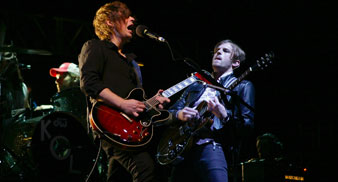 Kings of Leon have confirmed that the second single to be taken from their number one album Only By The Night is to be “Use Somebody” and will be released on December 8.

The single is the follow-up to UK chart topper “Sex On Fire” which is still top 5, and will come backed with a Lykke Li remix of Because of the Times album track “Knocked Up”.

The band are currently on a tour of the US and return to the UK for a series of sold-out arena shows, starting on December 1.

Kings of Leon are set to play: