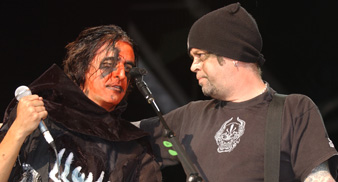 Paul Raven, the bass player with Killing Joke and Ministry has passed away unexpectedly aged just 46.

Raven had been recording in a Swiss studio in Geneva with Ted Parsons and Marco Neves in Geneva for the band Treponem Pal when his death occured after a day’s recording.

Born in Wolverhampton in 1961, Raven was a prolific musician and at various times in his life he played and wrote with several bands including Ministry, Godflesh, Prong, Pigface, Murder Inc and Amen.

Killing Joke’s frontman (pictured with Raven above) said earlier today: ”We are all deeply stricken with grief at the unannounced departure of possibly the funniest man on planet Earth and a brother to us all. Paul Vincent Raven unimaginable sadness is felt by all”.

Raven’s brother Dan added: ”We are in deep shock and we miss him a great deal. We love him”.

His funeral is to be held in coming weeks, for more information on where to send floral tributes etc, go to www.killingjoke.com or www.myspace.com/killingjokeofficial.