He's bringing his Futuresex to the Millennium Dome 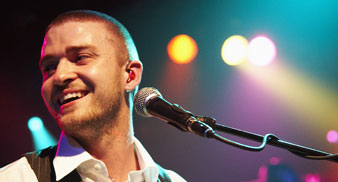 Justin Timberlake has confirmed that he is to play over 30 dates in Europe next year, as part of his worldwide Futuresex/Loveshow tour.

The London shows will be at the newly named 02 Arena, formerly the Millenium Dome. There are massive stark billboard advertisements featuring the Dome that have gone up around London, with the name ‘Justin’ superimposed on it.

Ticket details have yet to be announced but Justin’s fan club members will be able to get their hands on pre-sale from tickets tomorrow (October 27) at 1pm.

Justin Timberlake will be accompanied by a 14-piece band and lots of dancers!

The extravagant shows will call at the following venues:

For more details about the shows, click here to go to Justin’s homepage