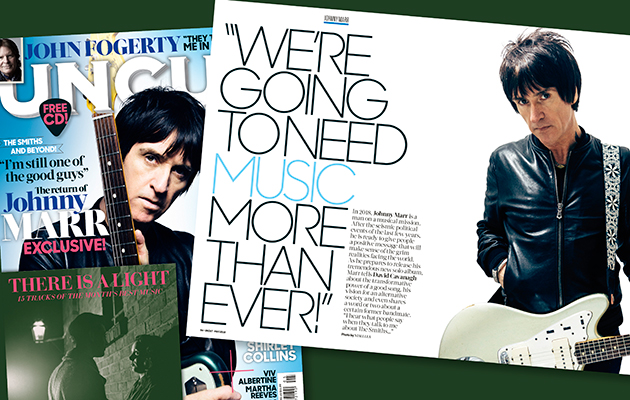 Johnny Marr has released details of his new album, Call The Comet.

The album will be released on June 15.

Ahead of the album;s release Johnny has spoken exclusively to Uncut about his latest musical mission and the challenges of writing songs in the “insidious and toxic” atmosphere created by the Brexit vote and the election of Donald Trump.

“What bothered me, going in to the record, was that my creativity was being contaminated by these people,” he says in the new issue of Uncut, on sale now. “It was impacting on the place where I live, on my friends’ thinking. I almost had to make a pact with myself to get around the political issue, so that my record wouldn’t be spoilt by it. The best thing I can do is let the people who are interested in me know that I’m still one of the good guys; that I’m feeling it with them.”

Asked how he feels that his former Smiths bandmate Morrissey is now on the other side of the political chasm, Marr says: “I never thought about that. I have other concerns.”

One of those appears to be attempting, through his music, to envision a better future. “I don’t mean there’s going to be a revolution imminently, but long-term – and I’m only talking a couple of decades – I imagine there’s going to be an alternative society… It will have a shared consciousness and a compassion for other people, animals, oneself… The old political vocabulary belongs to another time now. It’s the young people who are going to make the change.”

You can read more in the current issue of Uncut – which is in shops now and available to buy online by clicking here.

The Call The Comet tracklisting is:

You can hear “The Tracers” below:

You can watch a trailer for the album here:

And you can pre-order the album by clicking here.

Johnny Marr will play the following tour of intimate venues to preview the release of Call The Comet:

Uncut: the past, present and future of great music