Johnny Marr has announced details of his second solo album, Playland. The follow-up to 2013's solo debut The Messenger will be released on October 6. 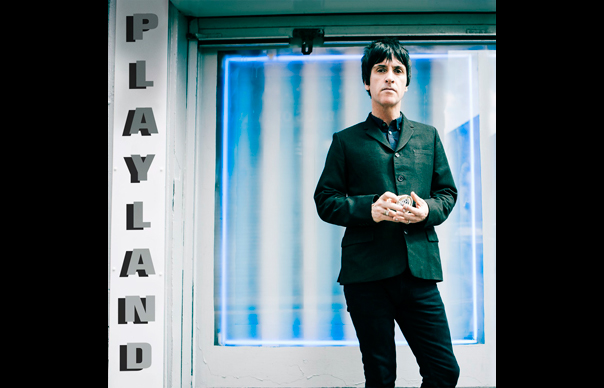 The follow-up to 2013’s solo debut The Messenger will be released on October 6.

Speaking exclusively to NME, the former Smiths guitarist said it was a continuation of his last album, written while on the road in the past two years. Unlike its predecessor, which was made between Berlin, New York and Manchester, Playland was recorded in London at Tritone Studios near Tower Bridge and will come out on the same day as lead single “Easy Money”.

“It was deliberate to work in London,” said Marr. “Where you work definitely affects how it sounds and seeps into the music, and I’ve developed a really good feeling for London in the past couple of years, I like the frenetic atmosphere.”

The title was inspired by “Homo Ludens”, by Dutch historian and cultural theorist Johan Huizinga. ‘Homo Ludens’ translates as ‘Man The Player’, or ‘Playing Man’. As with ‘The Messenger’, it was produced by Marr and his co-producer/band member Doviak, mixed by Claudius Mittendorfer in New York and mastered at Abbey Road by Frank Arkwright, who has in the past worked with Arcade Fire, The Smiths, New Order, Joy Division, Coldplay, Oasis and Primal Scream.

“The album’s main themes are the atmosphere of the city, and the preoccupations of the people who live in them; those preoccupations being consumerism, sex and anxiety, or distraction and transcendence from those things,” he says.

Of the autobiographical songs on the album, Marr says “25 Hours” is about the realisation he had as a child of having to do something to escape the life that was laid out in front of him, and features the lyric “Being chased by the priests and the freaks who are hunting me down with attitude/The heat and the bricks are falling on me like doom”.

He says: “I was immersed in the Catholic school system and an oppressive upbringing, looking at a life of having to consort with people that I didn’t want to be around. I realised you need to find some escape to break out of that, and that’s when I realised art was a way of escaping, in my case the music I was making or wanted to make. I would’ve been eight or nine, and I knew I just needed to escape the life that I was in. I got a sense of what might be my destiny if I didn’t do that.”

He describes “Dynamo” as a “love affair with a building”, inspired by his ongoing interest in psychogeography, the study of an environment’s effect on the behaviour of the humans within it.

“It might happen when you look up at a building, modern or old, on a clear summer day, big blue sky behind it filled with jet streams, and not being able to help think of stories that go with it all. I’ve been interested in the city and the people in it since I was a kid, it has this romantic attraction I just clicked with. Then when I was older I started reading more about it and got into the philosophy behind it. Of course, when you’re writing about something like that, it often works out that you’re writing about a person too.”

“The Trap“, meanwhile, is about “how we try to hide what we’re really communicating with each other”, and “Easy Money” is about greed, “which is everywhere, but you see so much more in the city”.

The Playland tracklisting is:

Johnny Marr tours throughout October. He will play: