John Lennon: “He wanted to break out of the box of being a Beatle” 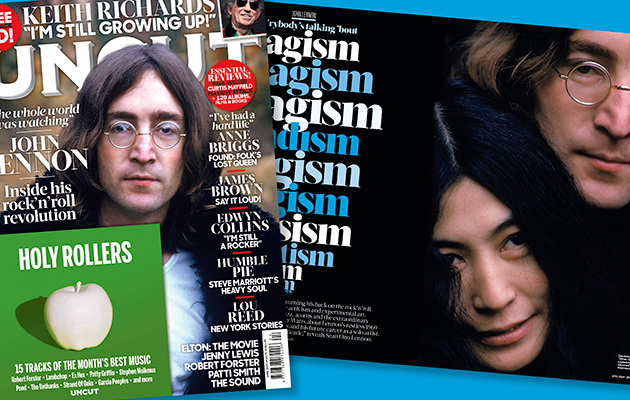 The new issue of Uncut – in shops now and available to buy online by clicking here – follows John Lennon throughout a turbulent 1969 as he embarks on a series of wild avant-garde experiments with Yoko Ono on the way to extricating himself from The Beatles and establishing himself as a solo artist.

As well as the famous bed-ins, the naked experimental films, the avant-garde albums and the political campaigns, there is the formation of a new musical outfit, The Plastic Ono Band, hastily assembled to play the Toronto Rock’N’Roll Revival festival at the invitation of Kim Fowley on September 13, 1969.

The Plastic Ono Band bassist Klaus Voorman remembers rehearsing their set of rock’n’roll classics on the plane from London. “We went once through each song,” Voormann tells Peter Watts. “Then we got to ‘Cold Turkey’. I thought it was a great song and we should spend time to  get the right feeling, but we didn’t.”

Inside the venue, the band got another chance to rehearse in the dressing room, although the bass and two guitars were plugged into a single amp and they didn’t have a drum kit. A nervous Lennon threw up backstage. Voormann was worried his friend was going to stain his fine white suit. “One thing hardly anybody realised is that John wasn’t a frontman, that wasn’t his thing,” he explains. “Paul was the frontman of The Beatles. John didn’t know how to handle the crowd. It was wrong to play ‘Cold Turkey’, it was a lousy version and the crowd didn’t like it. John got angry. That wasn’t cool.”

After playing a few rock standards, “Yer Blues”, “Cold Turkey” and “Give Peace A Chance”, the set  took an unexpected turn. “I heard this feedback and thought somebody needed to turn the mic down,” says drummer Alan White. “But it was Yoko, in a bag, on the floor, howling through a microphone. That was a bit of a shock and the audience were as stunned as I was. It was weird – but it was exciting too and that’s what she was into, that’s what she wanted to get over.”

Voormann thinks that Ono’s performance was amazing. “She was doing everything she could possibly do to let the people know that war was terrible,” he says. “By the end she was croaking like a dying bird. It was heartbreaking. I really heard tanks and soldiers and people dying. At the end, John came and embraced her. You could see exactly what he saw in her. He was proud of her and loved her, and in a way he couldn’t care less about the public, but in another way they were trying to spread this message.”

On the plane back to London, Lennon decided The Plastic Ono Band were his future now. On September  20, during a meeting at Apple’s headquarters, he told Paul McCartney and Ringo Starr that he was leaving The Beatles. Ten days later, he invited Voormann and Eric Clapton to join him and Starr at Abbey Road. Lennon’s post-Beatles career was to begin in earnest.

“John said we would do ‘Cold Turkey’ and I was happy about that,” says Voormann. “We went in the studio and John and Eric were playing lots of different riffs until we created this haunted thing.” When the single was released on October 20, the credit on the green Apple label read simply “John Lennon”: Lennon-McCartney was no more.

Sean Ono Lennon feels that some of his father’s more radical interventions in 1969 were partly inspired by a deliberate attempt to break with his own weighty history: “It was a reaction to being a Beatle and being told what to wear and say. He wanted to break out the box of being a Beatle. He always had an instinct that wasn’t rebellious as much as a need to escape the confines of conventional society. He was intellectually driven and wanted to figure out what the world was and who he was and what love was.”

You can read much more about John Lennon and Yoko Ono’s 1969 in the new issue of Uncut, on sale now.