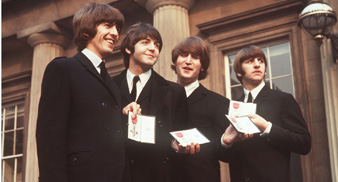 John Lennon‘s MBE has been found in a vault at St James’ Palace, nearly 40 years after the Beatle returned the honour to the Queen in protest at the Vietnam War.

The Beatles were all awarded an MBE in 1965, but Lennon decided to send his back in 1969 along with a protest letter addressed to the Queen, both have now been found at the Central Chancery of the Orders of Knighthood, the place they were originally returned to. Beatles fans had assumed that the metal cross had been re-used or melted.

Lennon’s letter to the Queen says: “Your Majesty, I am returning my MBE as a protest against Britain’s involvement in the Nigeria-Biafra thing, against our support of America in Vietnam and against “Cold Turkey” slipping down the charts. With Love, John Lennon.”

Speaking to The Times newspaper, a spokesman for Buckingham Palace said that what happens to the insignia will probably rest with Lennon’s widow Yoko Ono as she controls his estate, “once they establish ownership”. It is thought that the metal cross and the accompanying letter could go on display at a museum.