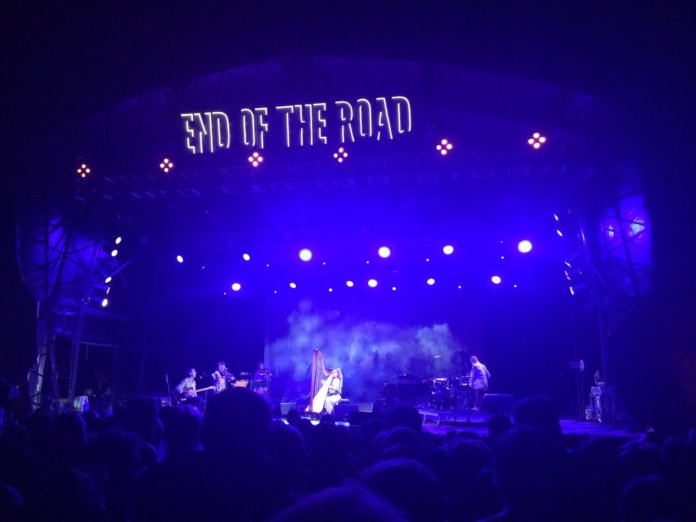 Behind Joanna Newsom and her four-piece band hangs a giant replica of the artwork from last year’s Divers, her fourth album. Created by artist Kim Keever, the piece was created by pouring different coloured inks into an aquarium diorama, and photographing the moment the pigments burst into the water. Despite the faintly apocalyptic image of giant clouds appearing to engulf a forest, the backdrop offers a distinctly more heavenly vision than the real life night sky on the final night of End Of The Road, which is pitch black and drizzling heavily. “You guys are very brave and awesome to be here right now in the cold and the rain!” says Newsom in the first of many weather-based entreats to the crowd. The Californian in her seems concerned that we’re freezing in the mild chill – but then, most of us are only trying to wield beers and soggy cigarettes, not claw out complex meters on a giant stringed instrument. At any rate, on opener “Bridges And Balloons”, the soft patter of raindrops seems to syncopate perfectly with Newsom’s ornate harp figure; not only can she bend intellect and musicianship to her will, but the natural world too, apparently.

The decade elapsed since the release of Newsom’s debut album hasn’t dimmed the awe of seeing her play live; not just obvious feats, like the way she seamlessly flits between piano and harp on Divers opener “Anecdotes”, but her supreme knack for intensity. That song’s complex tapestry of mandolin (courtesy Ryan Francesconi) and harp combines to an anxious cosmic whirl, while the gasps in her voice on “Divers” make her existential lyrics feel as though they’re coming to her in real time. This is, she tells us, not optimum harp weather, and occasionally brings out a beeping tuner and tentatively checks the strings before launching into another epic. You wouldn’t know it: “Monkey And Bear” has never sounded better (at least to this seasoned Newsom gig-goer). She attacks the strings with a rare anger, and lights up her tale of betrayal at the hands of an intimate with incandescent rage. When she suddenly slaps the strings quiet, stills the band, and embarks on a quieter, more ornate run, it feels for a second as if the ground has opened up. Similarly, the contracting, piercing chorus of “Leaving The City” shakes with a violent and profound sadness.

The middle of Newsom’s set skews warmer: “Waltz Of The 101st Lightborne” feels like it should roll over the credits of an old-timey feel-good flick, and the skittish countermelodies between harp and keyboard on “Sapokanikan” are filled with wonder. Her vocal harmonies with multi-instrumentalists Mirabai Peart and Veronique Serret are lush and thrilling: the “hoo hoo!” cries at the end of “Have One On Me” dash like shooting stars, and send “Time, As A Symptom” spiralling skywards. After checking her setlist, Newsom realises she has less time remaining than she had thought, and opts to end on “Good Intentions Paving Company”, an accidentally perfect choice. “Well, behind us the road is leaving…” she trills, as End Of The Road 2016 prepares to dance out its final night.