Rapper Jay-Z performed a special version of his hit "99 Problems" at a rally for Obama's re-election campaign in Columbus, Ohio, changing the lyrics to reference Obama's Republican opponent Mitt Romney. Jay-Z's new version swaps the line "I've got 99 problems but a bitch ain't one" for "I've got 99 problems but Mitt ain't one". Watch the clip by clicking the link below. 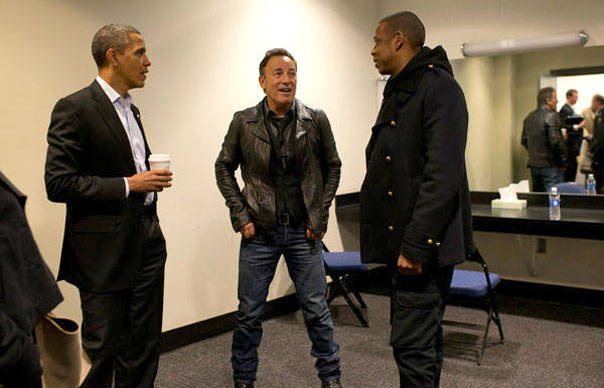 Rapper Jay-Z performed a special version of his hit “99 Problems” at a rally for Obama’s re-election campaign in Columbus, Ohio, changing the lyrics to reference Obama’s Republican opponent Mitt Romney.

Fellow Obama supporter Bruce Springsteen also appeared at the rally. It follows an embarrassing event on Saturday (November 3), also taking place in the ‘battleground’ state of Ohio, at which just 200 people turned up to see Stevie Wonder perform.

Jay-Z and wife Beyonce have long been supporters of Obama, playing at a tribute concert to the President in 2008 before he took his oath of office. In September, they raised $4 million (£2.46 million) for the re-election campaign by hosting a fundraiser at Jay-Z’s 40/40 club in New York. Last month, Jay-Z appeared in a campaign video titled The Power Of Our Nation.