Plus our Bowie Ultimate Music Guide is coming back into the shops, too 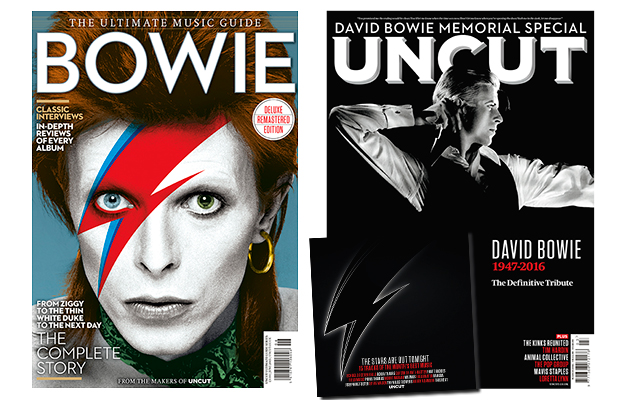 February 26, 1976. At the Maple Leaf Gardens in Toronto, the 17th night of the Isolar tour came to its traditional close. As the stark, expressionist spectacle reached its climax, David Bowie fired an imaginary arrow into the air. On cue, his lighting director plunged the stage into darkness. Cut to black.

Thirty feet from the stage, the photographer John Rowlands took the picture which adorns the cover of Uncut this month, and which Bowie reputedly counted as one of his favourite images of himself. In the midst of the grief and chaos which has engulfed the music world this past week, it occurred to us that Rowlands’ shot would be a fitting one to use on the front of this special issue of our magazine, one which we’re rushing into the shops a little earlier than planned: you should be able to find it in the UK on Thursday.

I can think of few words I like less than “iconic”, and the way it’s casually bandied about in journalism, often to the point of meaninglessness. Nevertheless, it seems apposite here. No rock star has understood the iconic possibilities of his art more than Bowie; has grasped the mythic potential of what he does. “He believed in costume, and theatre, choreography, set design, lyrics, the right producer, the right engineer,” says bassist Herbie Flowers, one of the many Bowie associates who were so generous to us with their time and tributes. “He could do everything.”

Time and again in the interviews collected in this month’s Uncut, there is testimony to the range and complexity of Bowie’s genius and character. A master of bold gestures and otherworldly glamour on one hand, a deeply humane friend on the other. We hear of a touching gift for producer Ken Scott; a brilliant practical joke at the expense of Brian Eno; a memorable last encounter with one of Blackstar’s gifted lieutenants, Donny McCaslin. Bowie contained multitudes, and David Cavanagh has reflected on that in a 5,000-word memorial piece remarkable for its scope, erudition and emotional heft.

“Assessments of Bowie’s legacy came from every corner of the culture, every place where a culture prevailed,” Cavanagh writes, “and when you added up his significance to all of them, he seemed to have had a number of simultaneous lifetimes… In each encomium his fearlessness was a common theme. His uncanny ability to see into the future – and then promptly shape it – was another.”

To complement all this, we’re also making our Ultimate Music Guide to Bowie available again, in case you missed it when it was on sale last summer (That’ll be in the shops on Thursday, too, though you can now order one from our online shop). The format is the same as usual with our UMGs: in-depth album reviews, coupled with unedited interviews from the NME and Melody Maker archives. Now, of course, some of those interviews inevitably take on a terrible new poignancy. In 1977, Bowie tells Allan Jones about how fatherhood has changed him. His son’s future is what concerns him. “My own future slips by,” he says. “I’m prepared for its end.”

“There are still so many people on an immortality kick, though, and it amuses me now,” he continues. “We’ll do anything in our power to stay alive. There’s a feeling that the average lifespan should be longer than it is. I disagree. I mean, we’ve never lived so long. Not in any century that man’s been on this planet.

“Not so very long ago, no-one lived past the age of 40. And we’re still not happy with 70. What are we after exactly? There’s just too much ego involved. And who wants to drag their old decaying frame around until they’re 90 just to assert their ego? I don’t, certainly.”

Back in Uncut, 2016, it’s striking how much Bowie permeates our own culture. In pieces filed long before his death, artists as diverse as The Pop Group and Clint Mansell note his influence. The memoirs of his landlady, with whom he lodged for nine months in 1969, turn up on our Books page. And among other sad deaths logged in our Not Fade Away section, there is an obituary for Brett Smiley, one of those fated glam starlets whose careers were launched in the wake of Bowiemania. We can’t escape Bowie this month – and, thankfully, we never will.

He’s told us not to blow it, after all…