Introducing The History Of Rock 1970

And plenty of other end-of-year business... 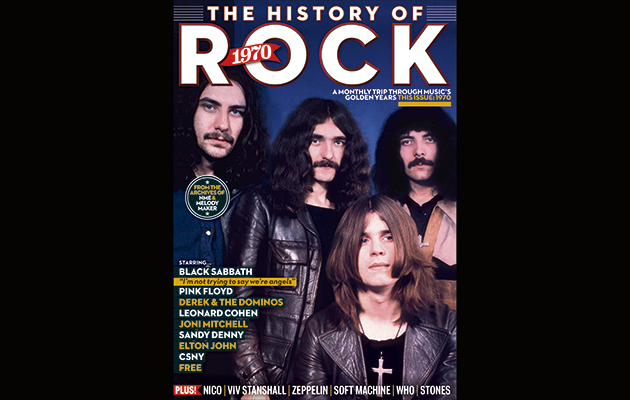 First up, a quick thank you for all your correspondence about Uncut’s review of 2015 issue, not least our Top 75 albums of the year. If you haven’t been in touch, but would like to join the debate, please do email us at uncut_feedback@timeinc.com. I’ve also posted my own Best Albums of 2015 list; a perhaps dubiously comprehensive survey that runs to 140 LPs – not a personally significant number, as someone wondered on Twitter (http://twitter.com/JohnRMulvey), just the sum total of records I’ve liked these past 12 months. Hopefully somewhere in the depths of these lists you’ll find some new things to discover and inspire; I’m going to try and aid that process by adding some links and music to my personal selection when I get a moment.

In the meantime, though, we have more new things to, with any luck, interest you. Last summer, we embarked on a major – some might say foolhardy – project of telling the story of the last 50 years of music in a new monthly magazine. That mag, The History Of Rock, has now emerged from the ’60s and reached 1970, in an issue which goes on sale in the UK this Thursday – but which you can buy now, along with the 1965-1969 volumes, at Uncut’s online shop.

1970, then. A year of notable shifts, some of them involving facial hair and heavy leather jackets. “What is this that stands before me?/Figure in black which points at me…” Here’s John Robinson to introduce the issue…

“Welcome to 1970. A new decade brings re-evaluation for the stars of the 1960s. It says much about their qualities that they knew when moods were changing and their influence might be changing with them. Pete Townshend this year is humble, Mick Jagger wants to keep on the move. Paul McCartney, meanwhile, breaks up the Beatles.

“Jimi Hendrix prefaces his performance at the summer’s Isle Of Wight festival with a Melody Maker interview. In it he states that the end of one musical era ‘started by the Beatles’ is over, and that he is working on new music that will play a part in the coming era. ‘Jimi Hendrix will be there,’ he says.

“As much as it is about endings, though, 1970 has some startling new beginnings. The spectacular rise of our cover stars Black Sabbath is one such. The massive impact made by Free another. Both bands take blues purism and rewire it – along the way finding completely new audiences.

“Making sense of the changing times were the writers of the New Musical Express and Melody Maker. This is the world of The History Of Rock, a monthly magazine which reaps the benefits of their extraordinary journalism for the reader decades later, one year at a time. In the pages of this sixth issue, dedicated to 1970, you will find verbatim articles from frontline staffers, compiled into long and illuminating reads

“Sadly, Jimi Hendrix didn’t make it much further into the new decade. Otherwise, representatives from New Musical Express and Melody Maker are where it matters. Tea with Leonard Cohen. Tomato sandwiches with Mick Jagger. Under canvas at the Isle Of Wight.

“Join them there. There’s a new day dawning.”