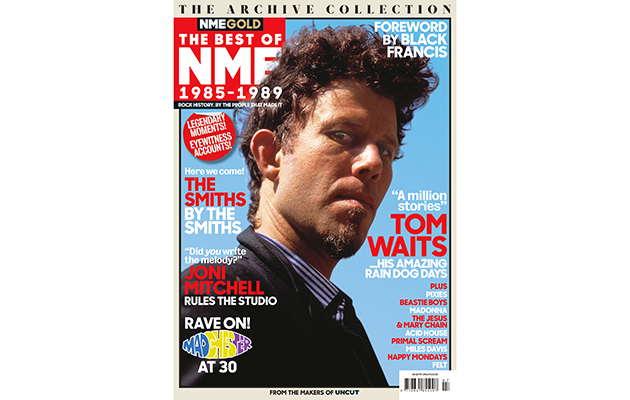 To the ’80s, then. Or, more specifically, the second half. In this latest instalment of our ongoing NME Gold series, we witness creativity, rebirth and downright weirdness as it occurred during 1985 – 1989 as documented in the pages of NME. As someone who came of age during this period, these archive pieces on Madchester, The Smiths and more are especially vivid. And beyond that, there’s also a splendid forward by Black Francis. It’s in shops from this Thursday (July 25) but you can buy it from our online store here. Anyway, here’s John Robinson, our one-shots editor, to tell you more, as well as a teaser from Francis’ intro.

The latest in our Best Of NME series charts 1985-9. A blend of archive features and new eyewitness accounts, the mag contains wonderful new insights on the music world post-Live Aid. Includes arguments with Joni Mitchell, the reinvention of Robert Plant, John Cale and the birth of Madchester, and life in the studio with Tom Waits: “Play like a fat guy in a hat!”

“When I first started, in Boston the mainstream side of things was really easy to laugh at,” recalls Black Francis in his introduction. “Heavy metal had grown into something with a lot of hair and all the clichés of spandex, something about the mainstream was shallow and it was easy to not be that. When MTV first started I was about seventeen and at high school, I’d never seen it before and I went on a ski trip and there was a television at the motel and MTV was on and I remember seeing The English Beat and Elvis Costello and stuff like that and I thought ‘oh, there’s something interesting going on in the world and it’s right here on MTV. A couple of years later when I was starting a band it had grown and become much more dominated by the big-selling commercial music. At the beginning we didn’t know what was gonna be hot and they were just throwing stuff at the wall to see what would stick.

“At the other end of the scene, though, was a very strong seam of underground college rock. In the USA there was a system of radio stations and radio was much more important to people in terms of their consumption of music. So literally at the left of the dial there were all these little, barely regulated college radio stations that college kids ran. So as you travelled around touring there was all this stuff happening on the radio, all these underground bands, and all the bands from out of town, Australia or England or wherever, they were all coming to your city and paying at the club. I was just looking to make music but there was this underground rock music all over that seemed quite healthy. I wanted in on that, that was my big motivator.”