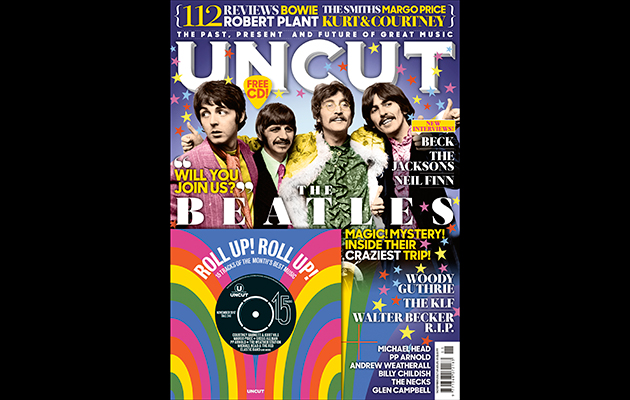 What do you do when you’ve just released the most significant album in rock history? For The Beatles in late 1967, the answer was simple: go back to work, but in the most playful way possible. In our new issue of Uncut, out on Thursday in the UK (though hopefully subscribers should have their copies sooner), we mark the 50th anniversary of recording sessions which turned into parties, psychedelic and spiritual adventures (“George swore to me he could levitate”), destabilising tragedies and, eventually, a redemptive and surreal trip into the unknown – the Magical Mystery Tour. “The songs had changed, our attitudes had changed,” says Ringo Starr. “Our well-being had changed.”

For our first Beatles cover in five years (a quarter of Uncut’s lifespan, interestingly) Michael Bonner has procured a handful of return tickets for the Magical Mystery Tour’s most doughty survivors. Good tales proliferate, as you’d hope. “I went to John’s house one night,” remembers Barry Finch, then a partner in Mayfair Publicity whose clients included Epstein’s Saville Theatre. “He had a big sweet jar. He screwed the top off and gave me a Black Bomber, a speed pill. We went into the garden and sat together on a stone seat. There was a plaque on the ground reading, ‘Sitting in an English garden waiting for the sun’. He turned to me and said, ‘Barry, I paid twenty grand for this house and it’s always fucking raining!’

“We went back inside where we took some acid. Then we went up into his recording studio. John began playing the guitar. I could play the piano a little. ‘This is good, Barry,’ he said. ‘Now go to B!’ But I didn’t know what B was. ‘Never mind.’ So we went back downstairs and that was the end of that.”

Elsewhere in the new issue, Stephen Deusner has an exclusive chat with Beck, in which he reflects on 25 years of “opening up the vocabulary”, and reveals all about his new album, Colors – Sgt Pepper and Thriller rolled into one, he claims, plausibly. Tom Pinnock meets up with one of my favourite British songwriters, Michael Head: a fiftysomething from Liverpool who alleges he’s never heard either The White Album or Dark Side Of The Moon. There are more interviews with The Jacksons, Billy Childish, PP Arnold, The Icicle Works, Bedouine, Neil Finn and – a strong highlight – Andrew Weatherall. The story about starting an early DJ gig with the theme from 633 Squadron is worth the price of admission alone, though obviously I would say that.

What else? On the spot reports from The KLF shenanigans, End Of The Road festivals, and, from me, the latest Necks residency in London. Album of the month is the wonderful Courtney Barnett and Kurt Vile hook-up, playing as I type, and other significant players in the reviews section include Robert Plant, Margo Price, Gregg Allman, David Crosby, and two big personal favourites from The Weather Station and Kaitlyn Aurelia Smith.

You can find a lot of this crowd on our free CD, along with Ryley Walker and Bill Mackay, Tricky, Circuit Des Yeux and more. I’m sure there’s more I’ve forgotten in there – Stephen’s pilgrimage to Okemah, Oklahoma on the 50th anniversary of Woody Guthrie’s death, for one – but don’t miss David Cavanagh’s magisterial farewell to Walter Becker; “The sardonic observer of humanity who’s secretly pleased that, with so many venal dollar-eyed incompetents around, he’ll never run short of material.”