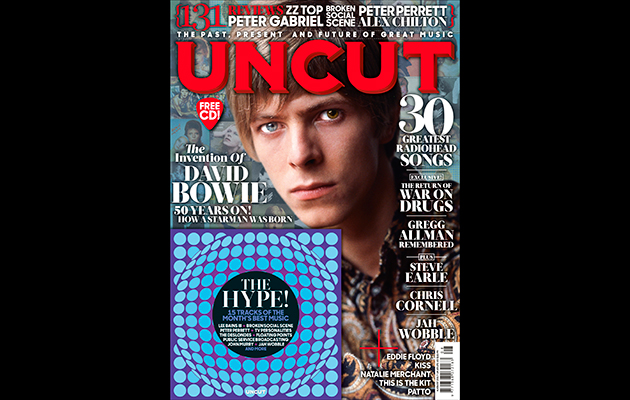 History is rarely as neat as we hope it to be, especially when sitting down to write a blog about the brand new edition of Uncut (out on Thursday in the UK, though subscribers should hopefully see their issues a bit before that).

Popular myth insists that David Bowie’s debut album sneaked out on the same day as “Sgt Pepper’s Lonely Hearts Club Band” – June 1, 1967 – when in fact the Beatles’ opus had been rush-released a few days ahead of that official launch date. The timelag did not materially help “David Bowie”’s sales figures, of course. That album, along with many more of the bold schemes and fleeting projects hatched by Bowie in the run-up to “Space Oddity”, have long been dismissed as juvenilia, from a time when the singer was supposedly more of a camp follower than fearless innovator. Every Beatles song can be seen to have had its own cultural impact; there are few who would argue the enduring significance of, say, “Please Mr Gravedigger”.

Nevertheless, the music that Bowie made in the ‘60s critically influenced one superstar in the making: David Bowie himself. Our cover story this month revisits those years to uncover the invention of David Bowie as we know him, with Michael Bonner conducting deep new interviews with an extensive circle of Bowie’s early court: Mary Finnigan, Keith Christmas, George Underwood, Hermione Farthingale, Phil May, John ‘Hutch’ Hutchinson, Alan Mair, Lindsay Kemp, Ray Stevenson, Herbie Flowers, Rick Wakeman and John Cambridge. “Everything David did in the ‘60s lead up to the ‘70s,” Farthingale, Bowie’s former girlfriend, tells us. “Everything was an experimental part of that learning curve.”

Elsewhere in this month’s Uncut, you can track similar experimental learning curves in the long careers of Radiohead and Jah Wobble; check through our usual encyclopaedic reviews section; and find touching, authoritative farewells to two more fallen heroes, Gregg Allman and Chris Cornell. We’re also proud to have an exclusive interview with Adam Granduciel, as The War On Drugs return with famous new friends, a major record deal, and an even more expansive sound.

It’s a story about how Granduciel is adjusting to success and the pressures that it brings, never more pronounced than when he recounts the gestation of the new War On Drugs single, “Holding On”. The A&R team were ecstatic when they heard an early version – “That’s the hit!” – but were a little disappointed to discover how it had evolved by the time the album was finished. Granduciel emerges as a quietly heroic figure, toggling between self-doubt and defiance in the face of potential artistic compromise.