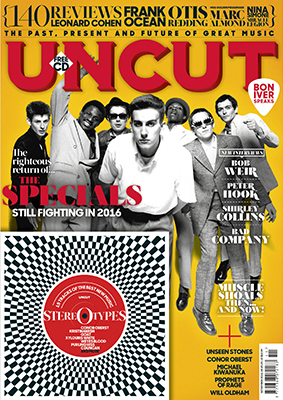 We have a new issue of Uncut, out today in the UK; maybe some of you, especially the subscribers, are already in possession of a copy? It’s the second we’ve published since we gave the magazine a significant overhaul, and includes a bunch of pieces I’m really proud of.

If there’s a prevailing theme to the issue, it’s one of notable comebacks. Our cover stars are The Specials, returning to action, scarred by bereavements, but aware that their anti-racist manifesto has a new urgency in 2016. Bon Iver tells Stephen Deusner about the complicated gestation of his eagerly-awaited third album. Bob Weir resurrects his long-neglected solo career, while still being deeply invested in the ongoing story of The Grateful Dead: “It would be sinful to walk away from that body of work,” he says to Andy Gill. “All those songs are still alive, and still evolving, and will continue to, for me, until I breathe my last breath.” We even visit an American town making its own kind of comeback – the musical crucible of Muscle Shoals, Alabama, flourishing again long after the heyday of FAME Studios and the legendary Swampers.

There are also remarkable contributions from two potent octogenarians. This month, at the significant age of 83, Leonard Cohen will release his 14th studio album. His third album in just over four years, You Want It Darker is the culmination of one of the most productive periods in Cohen’s career and, I think, one of the best albums he has ever made (Jason Anderson agrees, and his definitive review of You Want It Darker is a fitting way to open this month’s retooled reviews section). Before the appearance of Old Ideas in 2012, plenty of things had kept Cohen from the recording studio: long stretches of monastic retreat; pragmatic tours to recoup a lost fortune; and, most profoundly, a perfectionist streak that ensured every last word and note would be considered and reconsidered, year after year, until Cohen was satisfied enough to release them into the public domain.

Cohen did not, though, ever lose the ability to sing; I suppose some of his detractors might argue he never had much traditional aptitude for singing in the first place. Shirley Collins, on the other hand, has barely sung in public for nearly 40 years, her confidence deserting her when her then-husband, Ashley Hutchings, left her for another woman. “Dysphonia is the name that’s given to it now,” Collins tells Jim Wirth in one of this issue’s key features, as she heroically prepares to release her first (and very fine) album in 38 years, “but it was a mixture of grief, and nerves and humiliation – and just terror. Fright. Fear.”

Uncut is committed to new music, and in the new issue you can read about Frank Ocean, Weyes Blood, DD Dumbo, Xylouris White and many more fresh and exciting discoveries (I should mention that personal favourites 75 Dollar Bill make an appearance on our free CD). But 81-year-olds can encapsulate the past, present and future of great music, too. “Having listened all my life to field recordings, I feel these people behind me,” says Shirley Collins, referring to the singers who passed on the uncanny songs she loves, over the course of centuries. “I’m responsible for those songs. I’m a conduit. I think I understand this music better than anybody else.”

Trust, I guess, the experts.