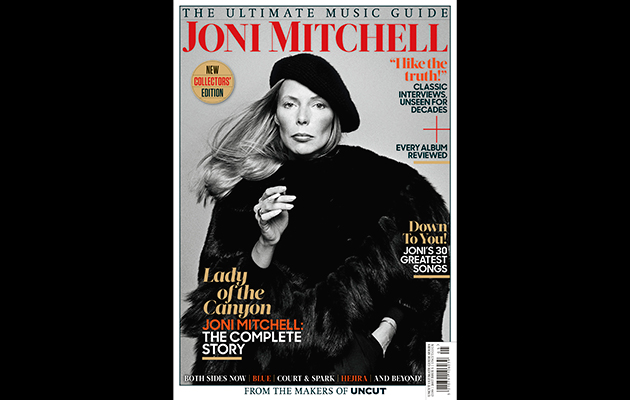 THIS ITEM IS CURRENTLY OUT OF STOCK; WE’LL AMEND THIS MESSAGE WHEN IT BECOMES AVAILABLE AGAIN

Mitchell has been creative about curating her own backstory, with a bunch of compilations since the turn of the millennium, even if she’s not typically one for nostalgia. A 2013 Canadian radio interview found her telling the interviewer how she didn’t much enjoy looking back on her career, or listening to her own extraordinary records. “I have one friend who comes over here and insists on putting my music on,” she admitted. “He’s into it. We’ll play pool. I’d rather have Duke Ellington on, frankly, to play pool.”

What, then, would Mitchell make of our tender, comprehensive and frequently awestruck Ultimate Music Guide; a testament to her genius? One suspects she might be uncomfortable with the retrospective angles, and at least some of the reverence. She is not, though, unaware of her own place in musical history. “I’m cursed by astrology to be deeper than the average person, and also have the need to be original,” she told the radio interviewer. “To plant the flag where no one else has been.”

The Ultimate Music Guide to Joni Mitchell is the definitive overview of every stage of that complex, groundbreaking career. A battalion of Uncut writers have provided deep and illuminating reviews of every one of her albums, from 1968’s Song To A Seagull right up to Shine, 39 years later. Along the way, there are new insights into her canonical ‘70s masterpieces, and valuable reappraisals of more neglected corners of the Mitchell catalogue.

There are, too, a host of revelatory interviews salvaged from the archives of NME and Melody Maker, which reinforce a sense of Mitchell as one of the most radical, intelligent and creatively uncompromising voices of the modern era. “David Geffen said to me once that I was the only star he ever met that didn’t want to be one,” she told Melody Maker in 1986. “The reluctant star, y’know….”

What she always wanted, of course, was to be far more than that. Another Melody Maker piece finds her in London at the start of 1970, for a show at the Royal Festival Hall. She has been working on a new album – scheduled to include a song called, at this point, “They Paved Paradise And Put Up A Parking Lot” – and talks about how America “may suddenly get very strange”.

“I want my music to get more sophisticated,” she says. Has any singer-songwriter ever fulfilled such a rash promise so completely?