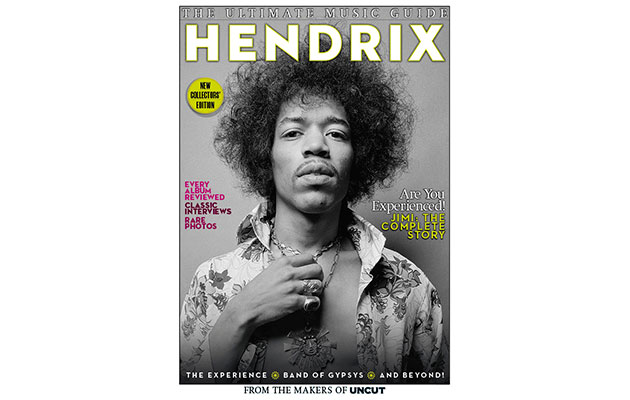 Have you ever been experienced? Well, we have. For our latest Ultimate Music Guide, we’ve turned our attention to the life and work of Jimi Hendrix. It is, I think, one of the most handsome and useful editions we’ve ever done: you’ll find it on sale in the UK on Thursday, but you can order the Jimi Hendrix Ultimate Music Guide from our online store now.

As usual, we’ve combed the NME and Melody Maker archives for those rare, cherishable Hendrix interviews; interviews in which he betrayed a gentle modesty and open-heartedness and inadvertently provided terrible intimations of his own mortality.

There’s an especially poignant one from a February, 1969 issue of Melody Maker. Bob Dawbarn is paying a house call to Jimi Hendrix at 23 Brooke Street, next door to GF Handel’s old place. On gaining entrance to the sanctuary, the assiduous Dawbarn notes a rubber rat, a stuffed panda and “a teddy bear in the last stages of malnutrition hung from a nail in the wall”. There is a gong near the bed, a vase full of feathers, multitudes of guitars and Hendrix himself, drinking tea and philosophising about how art evolves after the artist dies.

“It’s funny the way most people love the dead,” he tells the reporter. “Once you are dead you are made for life. You have to die before they think you are worth anything. I tell you, when I die I’m not going to have a funeral, I’m going to have a jam session. And knowing me, I’ll probably get busted at my own funeral.”

In just over 18 months, of course, Hendrix was dead, and rock’s longest and most complicated posthumous campaign rolled into action. For this Ultimate Music Guide, we’ve hopefully proved ourselves equal to the challenges of Hendrix’s labyrinthine catalogue. Over the 124 pages, you’ll find new reviews of the landmark albums made by Hendrix during his lifetime, and forensic guides to the often confusing albums released after his death.

“Nobody cages me,” Hendrix tells NME in 1969. Here, then, is the whole story of a genius and his legacy: from Club Wha? and The Scotch Of St James to Monterey and the Isle Of Wight, via riots in Zurich, go-kart tracks in Majorca, Electric Ladyland and a remote corner of Woodstock.