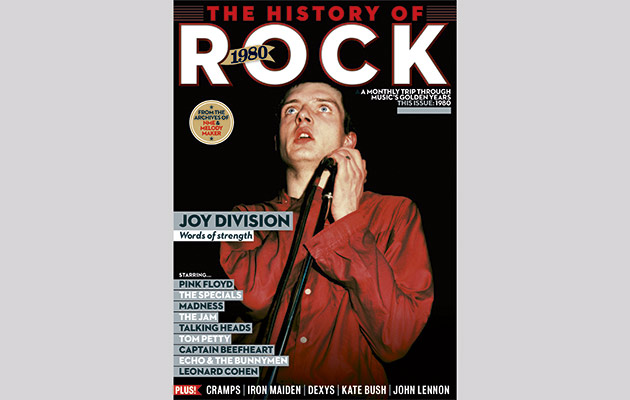 In the world of Uncut’s sister title The History Of Rock, we’ve arrived at quite an auspicious point – the 1980s! The latest History Of Rock goes on sale this week (in UK shops on Thursday, to be specific), and is dedicated to the best NME and Melody Maker stories of 1980. Inside, you’ll find extensive archive features on Joy Division, Pink Floyd, The Specials, Madness, The Jam, Talking Heads, Tom Petty, Captain Beefheart, Echo & The Bunnymen, Leonard Cohen, The Cramps, Iron Maiden, Dexys, Kate Bush and John Lennon.

If you’ve missed any of the volumes covering 1965 to 1979, please have a browse in our online History Of Rock store. You can also find History Of Rock: 1966 back in the shops now, after selling out a few months ago: Bob Dylan’s on the cover of that one.

But back to 1980. Here’s John Robinson, as usual, to introduce the issue:

“Welcome to 1980. The Reagan presidency and imminent nuclear war notwithstanding (both on the minds of NME writers), as the new decade begins, the music press finds plenty of reasons to be optimistic.

“The Specials are taking their 2-Tone aesthetic to America, while a passionate, cross-cultural ethos is on the rise in the shape of two other bands from the British midlands: Dexys Midnight Runners and UB40. Heavy metal, to the amusement of some, is in rude health. In Liverpool, psychedelia is enjoying a revival.

“After a year of litigation, one of the major energies behind punk, Malcolm McLaren is also back with a vengeance. Some of his plans are actionably bad taste. Others – like the relaunch of Adam And The Ants as piratical pop stars – are stylish, eloquent and full of future possibilities.

“Possibility, or at least what might have been, is at the heart of two tragic events of 1980. The death of Ian Curtis in May and the murder of John Lennon in December give the music press pause to reflect, and conclude that at the root of everything, music exists in order to celebrate life.

“This is the world of The History Of Rock, a monthly magazine which follows each turn of the rock revolution. Whether in sleazy dive or huge arena, passionate and increasingly stylish contemporary reporters were there to chronicle events. This publication reaps the benefits of their understanding for the reader decades later, one year at a time. Missed one? You can find out how to rectify that here.

“In the pages of this 15th edition, dedicated to 1980, you will find verbatim articles from frontline staffers, filed from the thick of the action, wherever it may be. Comparing tartan with Spandau Ballet. Observing the rise of Tom Petty with Bernard Manning and Manchester City FC. Overtaking a truck at high speed, in a car driven by Captain Beefheart.

“’Why aren’t you nervous, sir?’ asks the Captain of the reporter.

“Because in spite of the attendant peril, the ride is still so exhilarating.”