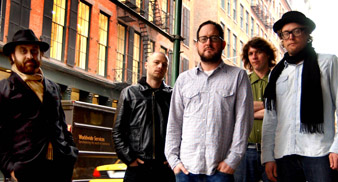 The Hold Steady have announced that they will release their first ever live album and a DVD documentary, ‘A Positive Rage,’ as a two-disc set on April 6.

The two discs capture the band in 2007, when the success of third album ‘Boys and Girls In America’ saw them embark on a lengthy world tour.

Speaking about the show, the second of a two night stint, frontman Craig Finn sets the scene, saying: “It ended up being a fantastic suburban blow out with band and audience on the floor, Frisbee and tailgating in the adjoining parking lot, and everyone singing along to every song…. It reminded me of the hardcore shows I loved as a kid, everyone sweating and screaming together in a rented hall. And drinking in the parking lot, of course. The next night worlds converged…. “

The 53-minute film was made across the whole year and includes backstage interviews, live footage and fan commentary.

The Hold Steady return to the UK this May, after another tour of the US and an appearence at the Coachella festival in April.

The Hold Steady’s UK dates, supporting the Counting Crows are as follows: