This year's festival goes on sale in April 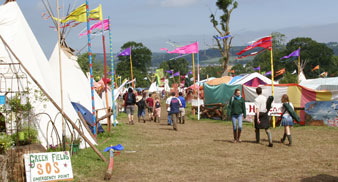 Glastonbury Festival organisers have announced that tickets for this year’s music event will go on sale to the public on April 6.

The three day festival, takes place on Worthy Farm, Somerset is set to take place on the weekend of June 27, 28 and 29, and as with last year’s event, fans wanting to apply for tickets will need to register their details.

The registration process, which includes providing a photograph for use as ID was introduced last year in an effort to stop ticket touts re-selling tickets.

Details about the registration process will be announced through the official festival website www.Glastonburyfestivals.co.uk later this month.

Check back to uncut.co.uk for details as we get them.

Last year’s event was headlined by The Killers, Arctic Monkeys and The Who.