Get A Pair of Free Tickets To See Slumdog Millionaire! 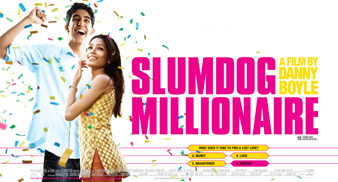 Danny Boyle’s award-winning, Golden Globe nominated and the critically acclaimed, SLUMDOG MILLIONAIRE is released nationwide on January 9, 2009 but uncut.co.uk is giving you the chance to see it for first and for free so you can make sure you’ve got all the answers on one of the years most talked about films!

Jamal Malik (Patel), an 18 year-old orphan from the slums of Mumbai, is just one question away from winning a staggering 20 million rupees on India’s ‘‘Who Wants To Be A Millionaire?’ Arrested on suspicion of cheating, he tells the police the incredible story of his life on the streets, and of the girl he loved and lost. But what is a kid with no interest in money doing on the show? And how is it he knows all the answers?

To coincide with this highly anticipated release we’re giving you a chance to see the film before it’s released at venues across the UK on January 6, 2009. Simply enter the unique Uncut code 285175 and get your free pair of tickets now at www.seefilmfirst.com!

Tickets will be distributed on a first come first served basis. So be quick!

Cinemas taking part in the Uncut screening programme are as follows: