Genesis Reform To Play The World

They Turn It On Again 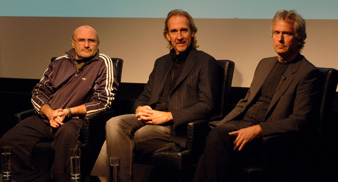 As previously reported on Uncut.co.uk Phil Collins is to re-join Tony Banks and Mike Rutherford in a reformed Genesis.

Collins is to re-join the prog-rock giants for an international tour, announced officially this morning at a press conference.

The “Turn It On Again” tour will begin a decade after the singing drummer left the group to pursue a successful solo career.

The mammoth tour will see the band play a series of stadium concerts in Europe next summer kicking off in the Olympic Stadium, Helsinki on 11 June, ending in Rome on 14 July after playing 12 countries in between.

Tickets for the UK dates go onsale on November 24. Other onsale dates are yet to be announced.

Collins had previously been the group’s drummer and backing singer.

The group had several immensely successful albums in the late ’70s and ’80s, selling upwards of 150 million longplayers.

To coincide with the Genesis tour, EMI Records will be re-issuing all 14 Genesis studio albums throughout 2007.

Phil Collins’ return to Genesis for an international tour has been speculated about for some time.

Original Genesis guitarist Steve Hackett has congratulated his former band mates, saying, “I would like to congratulate Tony, Mike and Phil for flying the flag once again. Good luck to them and I really hope they have a very successful tour.”

Hackett also further speculates that Peter Gabriel was indeed asked to be part of the reunion.

The guitarist told Uncut that he “was originally approached to discuss the possibility of a five piece which would have included Peter Gabriel, but since Peter’s schedule precludes this, it makes sense for the other three to celebrate the band in their ‘own special way’ .”

Hackett recently released a new solo record, ‘Wild Orchids’, and is planning a series of UK shows early in 2007.