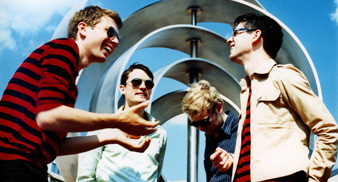 Franz Ferdinand’s Alex Kapranos and Nick McCarthy played a short set, including a new song called “Catherine Kiss Me”, during the Opening Night party at the Edinburgh Film Festival yesterday.

The party was held at the Edinburgh School of Art, where Kapranos and McCarthy took to the stage in front of an invited audience who included actress Tilda Swinton and Hallam Foe star, Jamie Bell.

“We’re the slightly less glamorous half of Franz,” joked Kapranos, before they played “Hallam Foe Dandelion Blow”, “Catherine Kiss Me”, “Matinee” and “Jacqueline”.

“We’ll let you go back to your banging House music now,” laughed Kapranos as they left the stage.