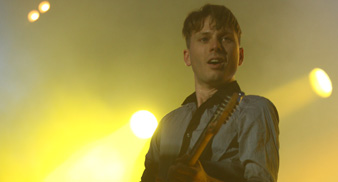 Franz Ferdinand‘s anticipated third studio album is to be released in the UK on January 26.

Talking to sister site NME.com, Kapranos said: “I can picture a marquee outside a theatre saying ‘Tonight: Franz Ferdinand’, there’s a sense of anticipation. It’s music for the dancefloor, (or) your bedroom as you psyche yourself up to go out, (or) a stranger’s bedsit coming down an hour before dawn.”

Tonight: Franz Ferdinand is the follow-up to 2005’s album You Could Have It So Much Better. The band won two BRIT Awards in 2005, for Best British Group and Best British Rock Act.

Franz have been previewing tracks from the forthcoming album at live shows throughout this year, and the full tracklisting is: