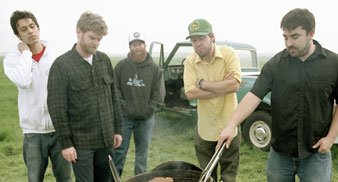 Ex-Grandaddy frontman Jason Lytle is giving away a free Christmas album via his Jasonlytle.bandcamp.com website.

Lytle improvised seven piano-based tracks for the album, and explained that the creative process was one of the most enjoyable he’s been involved with.

“It just so happens that playing my piano at home is one of my favourite things to do (in terms of music) so it was nice to be able to capture some of these moments of me playing aimlessly and relaxed,” Lytle blogged.

Lytle added that he’s currently working on a new solo album, stating: “Although I’m quite sure none of the songs will end up on the radio I’m guaranteeing that this will be the weirdest, most wonderful mayhem I have made yet.”

His last album, ‘Yours Truly, The Commuter’, was released in May.