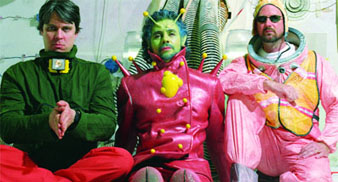 The Flaming Lips have revealed plans to take their feature film “Christmas On Mars” on a tour of US festivals.

The film, which was written and co-directed by frontman Wayne Coyne who also stars as a Martian in the film, took seven years to complete.

The Flaming Lips have also recorded an original soundtrack to the film, which will be available on DVD at the end of the year.

The film, which stars fellow F’Lips Steven Drozd and Michael Ivins, was premiered at the Sasquatch festival in Washington state and will run at US rock festivals throughout the summer.

“That group of people that comes in from two or three in the morning, they’re usually the most insane. They’ve taken their acid or their mushrooms, drank three or four Red Bulls, and they’re really in it for the long haul.”

But the film has received mixed reactions from audiences prompting Coyne to explain the film before each showing.

“At first I didn’t know if they felt they needed to be more respectful, like it’s an art movie,” he says.

“So I’ve been doing these introductions, like, ‘cheer, laugh and smoke pot!’ I don’t think people have any idea what the film is. Is this funny? Is this serious? Is this weird? Once people understand it’s all that, I think it’s a great relief.”