End Of The Road Gets Blazing Sunshine

I'm From Barcelona and Joan As Policewoman treat Dorset festivalgoers 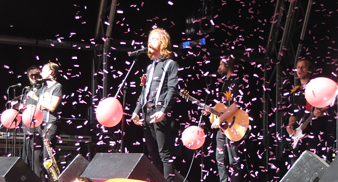 End of the Road festivalgoers are enjoying an Indian summer in Dorset today (September 15) following rain yesterday and freezing temperatures during the night.

Swedish multi-piece I’m From Barcelona, The Concretes and Joan As Police Woman have made the most of the weather with summery sets on the Garden stage, while New York rock project My Brightest Diamond and elegiac Brits Hush The Many Heed The Few played in the Big Top tent.

Joan Wasser, aka Joan As Police Woman, played a pared down solo gig, dedicating “We Don’t Own It” to Elliott Smith, and “Real Life” to the owner of her UK record label Reveal, Tom Rose.

Still to come this evening are sets from King Creosote, Architecture In Helsinki and Super Furry Animals, so check in with the Uncut Festivals blog for more news and reviews from End Of The Road here.