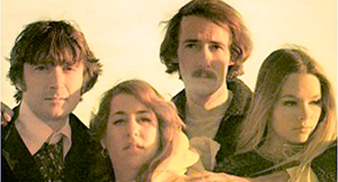 The singer had been ill with kidney problems, and had been on dialysis following surgery last month. He was 66.

Doherty was born in Halifax, Nova Scotia, and started his musical career in Montreal with The Colonials, scoring a minor hit in the early ’60s with
“The Man Who Wouldn’t Sing Along With Mitch”. Ironically, the band split in 1963 at a hotel named The Colonial.

By early 1965, Doherty had met and played with songwriter John Philips in his band The New Journeymen, and had also met Cass Elliot. With the disbanding of Phillips’ band, the three of them formed The Magic Circle.

Signing a record deal with Dunhill Records only six months later, the group changed their name to The Mamas & The Papas and recorded debut album ‘If You Can Believe Your Ears’.

The group had commercial hits around the worldwide with songs like 1966’s classic summer anthem “California Dreamin'” and the beautiful, Grammy-winning Number One, “Monday, Monday”.

Other songs made famous by one of the world’s first mixed-sex groups, include “I Saw Her Again Last Night”, “Go Where You Wanna Go”, and “Dedicated To The One I Love”.

The success of the band was compromised, however, when an affair between Doherty and Phillips’ wife Michelle caused her to be kicked out of the band in June 1966. Demand from fans meant that Michelle’s replacement Jill Gibson only lasted in the group for two months, and Michelle Phillips was re-instated in August 1966.

After the stresses, the group couldn’t concentrate on their musical direction whilst attempting to make a fifth record together, and after Cass Elliot left the group, The Mamas & The Papas disbanded in 1968. The band briefly reunited in 1971 for the album ‘People Like Us’. But dreams of a proper reunion ended when Cass Elliot died of a heart attack in 1964.

Michelle Phillips is now the only surviving member of the group as her former husband, John Phillips died in 2001 at the age of 65.

Click here for some video clips of The Mamas & The Papas to remind you how great they were:

Monday Monday performed on the Hollywood Palace show in April 1966

A live version of California Dreamin on the same show